How to Increase Jio speed 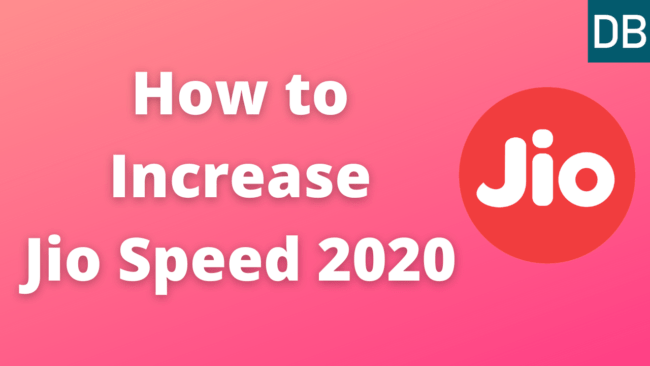 Are you suffering from slow speed connection on Jio 4G?  So, we’ve some tricks, that you can increase Jio speed. If you follow these tricks, you can definitely increase the Jio speed.

In this promotional offer, the company offered that it will have unlimited free internet for 6 months, free voice calls, and compliant messages to the users.

In Beginning, Jio’s internet was very fast, users bought new 4G handsets to get Jio SIM, and some users used to buy SIMs by paying the extra price in Black to get SIM.

But after some time the speed of Jio started to drop, initially, it used to have a speed of 50 to 60 Mbps, which has now increased from 5 to 6 Mbps. Now its average speed is around 8 Mbps.

What does Internet Speed Depends On?

Device Condition: The internet’s speed depends on your device conditions like how old your device is? How it’s mechanism is?

Network type: Depends on which type of networks your device supports?

Signal Strength: An internet speed also depends on how strong your network signal is.

APN Settings: The speed of the internet also depends on which type of internet proxy you are using.

How to Increase Jio Speed

There are a lot of ways to increase the internet speed of Jio, but here we’ve shown some best ways that will help you out to increase Jio speed on your phone.

A band is a network frequency at which service providers offer connection. You don’t have to make any changes to get the best coverage as your phone will automatically switch to a band that provides the best coverage.

For any network, APN has the most important role, if any of these values ​​change, the phone’s network also gets changes. Therefore, it is necessary for APN settings to have the correct values, because the speed of the Jio can also be increased by having the correct values.

After updating these APN settings, download any VPN application like Nord VPN from the Play store and connect to the server in Singapore or France. This whole process will increase the Jio net speed.

Apple devices do not allow to set up APN settings manually. So you don’t have to get panic about it, your iOS will automatically set the best APN settings for you.