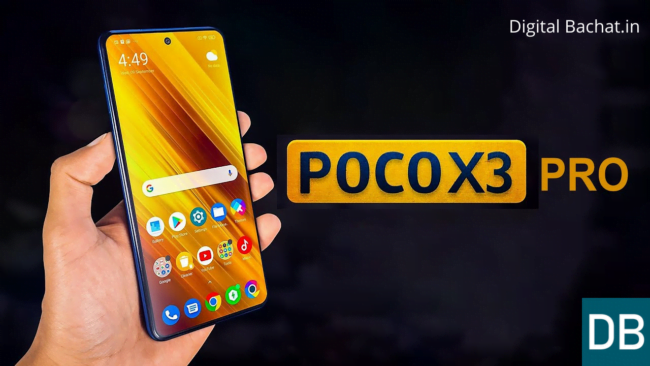 At present, the Poco company is also playing a good name in the mobile world, this company has launched a variety of mobiles, which, after making its debut in the European market at the beginning of last week, gave the Poco X3 Pro Today launched on 30 March in India.

It is being told that this smartphone is the successor to Poco X3, which was launched in the month of September last year. The version of this smartphone in India will likely come with the same specifications as the European version, but there may be some tweaks to the configuration as well.

The Poco company has confirmed some specifications of this smartphone on its website, being told that this smartphone will be powered by Snapdragon 860 SoC, this smartphone has UFS 3.1 storage, full-HD + display 120Hz refresh rate, 48 – The megapixel quad-rear camera is included.

It has a big battery of 5,160mAh for power, and 33W fast charging support is also provided. After knowing about this phone, we can expect that this smartphone will run on MIUI 12 based on Android 11.

This phone includes a 6.67-inch full-HD + display with touch sampling. 240-inch rate and brightness up to 450nits are also included. Talking about its storage, it can come with 8GB of RAM and up to 256GB of internal storage.

For photos and videos, the Poco X3 Pro will come with a quad rear camera setup with a 48-megapixel primary Sony IMX582 sensor with f / 1.79 aperture, an 8-megapixel ultra-wide-angle shooter with 119-degrees.

Talking about its connectivity, connectivity options include 4G LTE, Bluetooth 5.0, GPS / A-GPS, Wi-Fi 802.11ac, NFC, IR Blaster, and a headphone jack. The Indian variant is also expected to come with a large 5,160mAh battery with fast charging of 33W.

In extreme heat, its temperature can be kept in check with LiquidCool Technology 1.0 Plus. This smartphone also supports stereo speaker packs with high-res audio and a side-mounted fingerprint sensor.

Talking about the color of this phone, metal bronzes, frost blue, and phantom black colors have been introduced in the European market. It should also be noted that Indian pricing for this smartphone can generally be lower than European pricing.

So far, this company has not shared any more details about this phone, but we can get information about the pricing from the European launch.